Well, after much anticipation the day finally arrived. My first MotoTT trackday in Taupo!

Left Rotorua around 7am to get to the Taupo Motorsports Park just before 8am.
Being pretty eager to register and get the bike scrutineered.

Bret from Qmoto (a client of mine) was there setting up shop in one of the pit garages and had offered me some space. 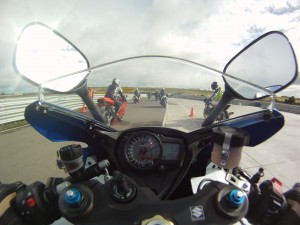 After a nervous hour of checking tyre pressures (32psi front and rear), trying to take my mirrors off and wondering where to put the GoPro HD camera, it was time to saddle up and head out for my first session in group four. As you can see from the photo to the right, that was meant to be the start of the video for session one, but must have pushed one to many buttons on the camera. My bad.

After a slow sighting lap and a couple more tyre warmers it was time to drop the hammer… or in my case, slowly attempting to gradually carry more speed through the corners. It was certainly a bit nerve racking having patches of new track laid about a foot away from the inside of most of the corners. Not good when the track was a little damp in the morning.

The MotoTT Track Five layout, shown left, was the layout for the track today, which was great as I felt like I spent more time going around corners than I did going along straights.

It’s surprising, but the organisers tell you not to bother looking at your speedo, as there’s a chance you’ll miss your breaking point, but I think in the first couple of sessions, I didn’t even get a chance to look down cause I was concentrating on the next corner too much.

Below is my YouTube video playlist of my second, third and fifth sessions of the day. As I mentioned earlier, I accidentally took a photo at the start of my first session and the fourth session I mounted the camera front facing in front of the headlight and it just had too much camera shake which made it unwatchable.

After the five wickedly awesome sessions (around 100 minutes on the track), I thought I was cornering a bit harder and getting my knee closer to the pavement, but based on the photos below I’ve got a bit more work up my sleeve for the next trackday. I’m hooked and will definitely be returning for another MotoTT trackday. Next time, I’ll be in Group Three! 😉

Check out these action shots of yours truly taken by Alick Saunders, one of the photographers today. 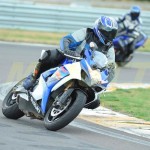 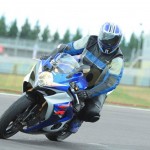 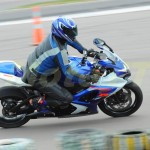 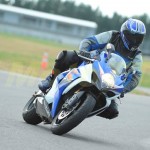 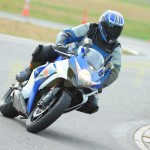 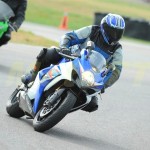 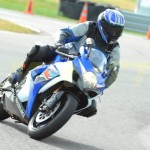 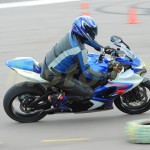 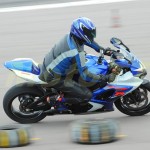 2 thoughts on “My first MotoTT trackday in Taupo